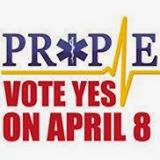 Tonight's elections throughout St. Charles County brought several surprises. The St. Charles County Ambulance District got its Proposition E to pass with a large ~58% (~19,000 votes) to ~41% (~13,000 votes)
voter approval. The new 11 cent property tax is reported to increase a real estate property's tax bill by $42 on a home worth $200,000.00.  The success of the measure will create a couple more ambulance bases, fill currently vacant positions and allow for the first district employees' raise in some three years.

In Wentzville, Alderman-elect Robert Hussey trounced current Alderman Gossett by a margin of  some 40 percent. The not-yet-official tally was Hussey with 638 votes and Gossett with 253. Reported polling had Hussey ahead nearly the entire election cycle, but no one seemed to believe Hussey would run away with the election the way tonight's numbers indicate. Hussey credited his wife's campaign management as a major factor in his decisive win.

Perhaps the most surprising -- but closer -- race was between Alderman-elect Linda Wright and current Wentzville Alderman Rick Stokes.  Again, reported polling had Alderman Stokes ahead by a few percentage points throughout this aldermanic election cycle. However,
Linda Wright looks to have won the seat by some 55 votes. The margin of victory is nearly 8 percent and so should not trigger an automatic recount however. The New Wentzvillian left a message for Ms. Wright, but has not heard word from her.

Many Wentzville pundits point to Mayor Guccione's and Missouri Representative Bryan Spencer's open endorsements of Wright and Hussey as significant catalysts to their victories. Some say that a New Wentzvillian article that circulated throughout Wentzville may have had an impact as well.  The story involved Alderman Stokes interaction with citizen Jason Johns in the parking lot of Buffalo Wild Wings about a year or so ago. The piece included statements from Alderman Stokes and a server that works for Buffalo Wild Wings.  Mr. Johns posted his version of events as comments on blogs about the story.

Wentzville's Mayor Guccione said "Wright and Hussey's hard work, deep commitment, concern for Wentzville and resumes are what allowed them to prevail. I welcome them to the board."

Grand Master and Alderman-elect Michael Rhoades will take over Wentzville Alderman Sonya Shryock's Ward 2 seat. Shryock did not run for re-election and Rhoades was unopposed.

Former Cottleville Mayor Don Yarber was unable to capture an aldermanic seat in his Ward 2 run. Donald Buchheit will take the seat instead with a an impressive 173 to 99 vote victory.

The “Buffalo Wild Wings incident” has been a topic of interest for a while in the City of Wentzville. The New Wentzvillian posted an article months ago seeking more information.

Until the past couple of days, the New Wentzvillian received only soft information. However, we recently obtained versions of events from both Alderman Stokes and the Buffalo Wild Wings server.

The loose outline of events has always been that, while on a visit to Buffalo Wild Wings, Alderman Stokes was belligerent, impolite, intoxicated, nearly got into a fight, almost hit someone with his car, and then talked the police into letting him drive home from the parking lot without issue

Stokes says this isn’t true and that he had some food, a drink, but then a ruffian of sorts confronted him in the parking lot for no reason.

The server says that on the night in question, some of Wentzville's aldermen came in to their“place of employment,” Buffalo Wild Wings.“One of them was Mr. Stokes who ordered a double shot of Jack Daniels with Sprite turned to me and said, ‘Could you maybe make this drink right?’”

The server says they then asked Mr. Stokes “what was wrong with” his drink so that it could be corrected.  Allegedly, he replied with an “annoyed tone, ‘Well, I asked for a double shot of Jack with Sprite so could you put the Jack in with some sprite?’ and winked” at the server.

Stokes says that “we were eating, so, it wasn’t like a drink fest; we were there, we ate and ah ya know, we had a cocktail and a way we go.”

The server said it seemed that the entire “evening consisted of the
aldermen making it seem like I was a huge inconvenience to them.”

Once the visit came to a close, Alderman“Stokes came out of the bathroom and walked outside. I watched as another one of my customers walked outside right after Mr. Stokes,” says the server.

The server “had a bad feeling and also realized at that time that Mr. Stokes was going to be driving and then thought back on the three drinks I served him. All three were double shots of Jack Daniels with Sprite.”

The server was very uncomfortable with how much Mr. Stokes had imbibed and so went to the front doors of the building to check on things.The server noted a seemingly civil conversation between two men in the parking lot.

“I turned around for maybe a total of three seconds to see if my customer’s wife was coming and when I turned back around to face outside, Mr. Stokes began to pull out of his parking spot while the other customer was still standing there and got extremely close to the customer.”

The server says “I did not witness the vehicle actually hitting the man because I immediately turned around and called for his wife.”

Stokes says that the other patron was a younger man who threatened Strokes with physical harm, so Stokes was forced to call the police from the parking lot. “When the police arrived, they began to question both of the men,” says the server.

The server went outside and asked to speak to one of the officers when they were finished. When the officer came inside, the server told him “that my only concern was that everyone arrived to wherever they were going safely. I also explained to the officer how much Mr. Stokes had drank and that I felt that they should check to make sure that he was okay to drive. I told the male officer this before Mr. Stokes had left.”

The server goes on to say that “my biggest problem with this entire situation is that, to my knowledge, the officers did not check Mr. Stokes in any way to make sure he was okay to drive.”

Whereas Stokes says that he left a board meeting at approximately: “10:15 I was in a Board of Alderman Meeting and the time of my call to the police is about 11:15.” Stokes intimates that this time frame means that the server’s allegations about drinks simply do not add up.

The Wild-Wings employee adds that Stokes “did not appear intoxicated but I also know, because of my job as a server, that a person can appear to be sober while being well over the legal limit to drive.”

Lastly, the server says that Alderman Stokes was especially disrespectful and wants someone to know how some aldermen act and “that there are people out there that feel disrespected.”

As a final quote, Stokes says that “I wish that the entire police report were open and everyone could see for themselves what took place.”
Posted by New Wentzvillian at 9:22 AM 29 comments: