Trump Waters Rubio During Rally For Christie Endorsement of Trump

Some are asking whether this behavior is presidential. Note the "Hail To The Chief" music overlay.

YOUTUBE QUOTE: Eric Greitens is the Brian Williams of the SEAL Teams."

In case you have been looking for it. Interesting Video on Missouri Gubernatorial Candidate Eric Greitens -- Fact or Fiction?

YOUTUBE QUOTE:  ". . . Here’s the deal if anyone is still wondering: Eric Greitens is the Brian Williams of the SEAL Teams.

Instead of believing a host of bought and choreographed endorsements, ask guys who ACTUALLY served with him. We ARE those guys – WE KNOW HIM. We are the nameless, faceless silent professionals who endorse this video and believe that being a SEAL is NOT a resume bullet.

Outsiders may wonder - why take Eric to task? Why give a shit? Because “brave men have fought and died building the proud tradition and feared reputation that I am bound to uphold.”

Enough is enough. This conversation is over. . . ."

Posted by New Wentzvillian at 8:14 AM No comments:

America In Search Of A Superhero; Explaining The Rise Of Donald Trump 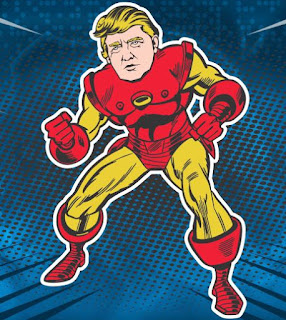 Every age has its heroes.  The stories of some, like Hercules, have withstood even the test of time.  Americans have embraced the superheroes of popular culture since Superman first appeared in 1933.  Today the superheroes of comics are a mainstay of the movie industry, and we flock to see our larger-than-life heroes.  Since 2002 there have been fifty movies centered on superheroes of one sort or another.  We have an almost insatiable appetite for this genre of entertainment.

Many political pundits have attempted to explain the rise and prolonged dominance of Donald Trump on the political stage as the result of his celebrity status.  If celebrity status alone were the key to political fortune then why haven't more movie and television stars made the transition?

The answer may be that voters this year are looking for a little something more.  America is in search of a real superhero and many believe they have found him in Donald Trump. 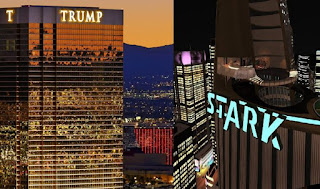 Trump may not have a metallic suit that is impervious to damage, but up until the Iowa Caucus he did  seem pretty impervious to attacks from others, and even from self-inflicted damage, in his high-price designer suits.  Other Presidential candidates rolled up their sleeves, donned plaid shirts, and tried to blend into the rows of corn to prove how common they were in Iowa, but  Trump flew in wearing his signature suit and tie... the Iron Man of business.

Perhaps some of the yearning for a superhero in politics is because the enemies America faces in the world seem as sinister and powerful as the villains of our comic book fantasies:  Vladimir Putin, Kim Jong-un, the Taliban, Al Qaeda, and ISIS.  Bio-terrorism, chemical weapons, nuclear proliferation, fear of another recession, and even climate change threaten our way of life.

And Iron Man isn't the only superhero Donald Trump is channeling.  There is a lot of Captain America in his appeals to patriotism, his kick-in-the-front-door approach to dealing with ISIS (or is it HYDRA?), his yearning to return to a simpler time.  Some of it is the image he cultivates for his campaign, but a lot is what voters project onto him.

Heroes aren't perfect.  They often stumble before they ultimately succeed.  The story-line wouldn't be as interesting if Superman didn't have his Kryptonite, The Dark Knight - Batman wasn't borderline psychotic, and Tony Stark didn't think so highly of himself.

It seems difficult to ever imagine Marco Rubio being that larger-than-life hero, or Ted Cruz, and certainly not Jeb Bush.  They all seem more like sidekicks.  Rubio is at best Dick Grayson as Robin.

Donald Trump appeared gracious after his second-place showing in Iowa, perhaps humbled, but not broken.  Tony Stark has also fallen and had to come back many times, rebuilding his fortunes much like Donald Trump.  Will Trump come back even stronger in New Hampshire?  Will he win South Carolina?   Will Donald Trump be the superhero so many believe him to be? 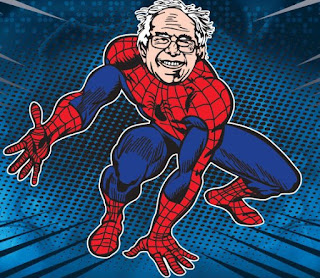 The Democrats have their superhero equivalent in Bernie Sanders.  Like Spiderman's Peter Parker he seems deceptively un-heroic, but the only way to explain the seemingly boundless energy of a 74 year old man on the grueling campaign trail is a radioactive spider bite.  He certainly seems to have slowed Hillary Clinton to a crawl with some sort of sticky web.

There is, of course, a difference between being a real hero and one of fantasy.  We know there are no real superheroes.  But that doesn't stop the archetype of the superhero from being engrained in our popular culture.  It may not be at the conscience level, but I believe many Americans yearn for a political superhero to save the nation from threats both real and imagined.  To the extent a particular candidate reminds them of the characteristics they liked in the character of a superhero, the more drawn voters will be to that candidate.

Mike Carter is a past Director of the St. Louis Association of REALTORS, former Senior Lecturer at the University of Missouri, current Municipal Judge for the City of Wentzville, and General Counsel for one of St. Charles County's largest employers. He has worked for the Missouri Attorney General's Office in Consumer Protection as well as Missouri's Western District Court of Appeals.  Carter holds both a Juris Doctorate and a Master's Degree in Journalism from MIZZOU.  He has helped lead opposition to red-light cameras in Missouri and championed the countywide ban of red-light cameras in St. Charles County. Mr. Carter is married with two children and a family dog. His family belongs to St. Joseph Parish in Cottleville.  Carter's first book is expected to be published this Spring. (http://www.MikeCarter.com)
Posted by New Wentzvillian at 8:12 PM No comments: